What causes a Naegleria fowleri infection? 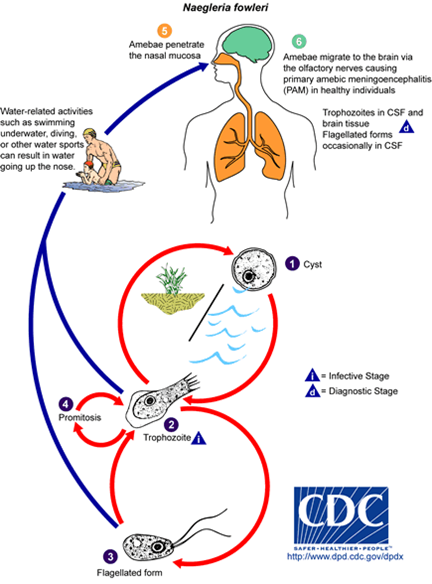 N. fowleri infection is a water-borne disease. Exposure occurs when people come into contact with warm freshwater usually through swimming, diving, water skiing, or other recreational activity. Although contact with infected water is common in the United States, symptomatic disease caused by N. fowleri is rare.

The danger of serious infection comes when water containing Naegleria fowleri is forced into the nose. The amoeba then migrates through the olfactory nerves and enters the brain. The initial exposure can occur when diving or inadvertently aspirating water during swimming. Rarely, underchlorinated swimming pools have been implicated in transmission. Because Naegleria fowleri can be present in untreated well water, there is a small but real chance of transmission to young children during bathing.Naegleria fowleri has also caused disease in adults who inject water into the nose as part of ritual ablutions related to religious practices or as an irrigating solution for sinus passages.


Additional information/materials for you: